“The Millennials’ Orchestra” series of blog posts are not meant to be opinion pieces, but rather founded in research, which I gathered and reported as part of my graduate capstone project from 2012-2013. This is a personal blog and does not represent the views or opinions of my employer.

The Millennials’ Orchestra: Competing for Attention

Orchestras and New Media, a report by arts marketer Marc van Bree, discusses the rapid
evolution of technology in contemporary society and the implications for Millennial engagement with symphony orchestras.122 From company brands and magazines to radio, TV, and websites, 21st century populations are exposed to a great complexity media with ever-increasing frequency.123 Contrary to the idea that Millennials are using and communicating through technology in place of one-on-one interaction, instead Millennials use technology and new media channels to enhance their social experiences.124 Social media networks are inherently interactive and can become powerful marketing and engagement tools for attracting this “always connected generation”125 to the work of symphony orchestras.126 As the graph illustrates below, the likelihood of online engagement with Millennial audiences is considerably greater when compared to audiences from older age cohorts.127 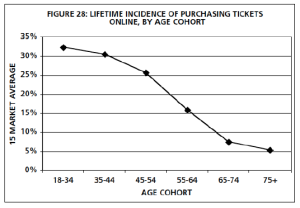 With so much competition for our attention with mobile devices, social media, and online entertainment and information, orchestras are smartly starting to incorporate these tools and channels into the way they communicate and engage with their audiences.  As a continuation of this discussion, my next blog post will focus on inter-connectivity of Millennials through technology and new media channels and how some nonprofit arts organizations, orchestras included, are integrating these modes of communication and interaction into their practices and performances.

Have you interacted with an orchestra that encouraged the use of mobile apps or social media?  What was your experience?

“The Millennials’ Orchestra” series of blog posts are not meant to be opinion pieces, but rather founded in research, which I gathered and reported as part of my graduate Capstone project from 2012-2013. This is a personal blog and does not represent the views or opinions of my employer.

Declining Demographics (Continued…)
I am a 24-year-old self-proclaimed classical music lover and symphony orchestra enthusiast.  I have always wondered – why aren’t there more people my age attending live symphony orchestra concerts…or are they?  As an emerging arts manager, I ask myself – How do we find these Millennials, better understand them, attract them, and sustain their interest in symphony orchestras and classical music performances?  Do we, as a generation, simply prefer to enjoy classical music another way?  It is with these questions and burning curiosity that I set out on a quest for answers…

Millennial attraction – What does it take?  (Source: Quinn.anya, Flickr)

So where are the Millennials?
Authors of Engaging Art: The Next Great Transformation of America’s Cultural Life address the ever-widening age gap in attendance and participation among classical music audiences.[1]  The majority of classical music concert subscribers, for example, are 65 years or older, retired, and relatively affluent (subscribers were about 10% more likely than non-subscribers, or single ticket buyers, to earn an income of $150,000 or more), and without children to care for at home.[2] The median age of audiences attending classical symphony orchestra concerts, according to the Audience Insight LLC study, is 60 years and older (2002).[3] According to Tepper et. al, in Engaging Art, arts organizations seem to expect for “younger people” to flock naturally to their events and fill in the gap.[4]  The graying effect (increasingly aging audiences), however, remains persistent in concert halls.[5] Greg Sandow illustrates how the age of classic music attendees has increased over the past half century.[6]  The future of classical music, and thus symphony orchestra performance, has been in crisis in Sandow’s opinion for the past 25 to 30 years.[7] Mark Stern of the University of Pennsylvania provides a conflicting argument in regards to audience age.[8]  Stern supports that age distribution among arts audiences actually resembles the adult population in the U.S. (as of 2008), which is considered to be heaviest in the “middle generations.”[9]  Regardless, Millennials remain largely uninterested in attending classical symphony orchestra concerts where they cannot be among peers.[10]

The decline in audience participation and the lack of Millennial generation audiences in the symphony orchestra concert hall has been explored by a variety of reputable authors and thought-leaders, including Alan Brown,[16] the League of American Orchestras,[17] Julliard professor and ArtsJournal blogger Greg Sandow,[18] and the National Endowment for the Arts.[19] Results from the NEA’s 2008 Survey of Public Participation in the Arts show how Millennial attendance at classical music performances has fallen dramatically (between 37.3% and 46.2%) over the past three decades (1982-2008).[20]  In comparison, overall attendance by U.S. adults (ages 18 to 75+) has decreased by 28.5% over the same period of time.[21]

NEA’s Survey of Public Participation in the Arts (Classical Music, by Demographic)

The WordPress.com stats helper monkeys prepared a 2012 annual report for this blog.

Thank you to my top commenters:

In my previous post, I reflect on the past of performing arts and arts management at the Smithsonian.  Now, I’m going back to the future with the Future of Music Coalition E-Summit 2012.

Earlier this week the Future of Music Coalition, an education, research, and advocacy focused arts organization in DC, hosted their first ever E-Summit via live webcast and Twitter engagement #FMC12.  The summit was scheduled from 9 AM to 6 PM on Nov 13, 2012 and included speakers with a variety of backgrounds – from music, new media, and Internet radio, to policy, advocacy, research, and arts administration.  Unfortunately, I did not think to capture #FMC12 Tweets via Storify until 2-3 days after the event, so I was not able to gather all of the conversations for this post.  The transcript, which follows the topic summary, starts about 1.5 hrs into the Future of Music Coalition E-Summit discussions.

Esteemed arts manager and American University professor, Andrew Taylor was among the thousands of those tuning into these conversations. Check out his #FMC12 Tweets here>>

The following transcript reflects insight and comments from several #FMC12 E-Summit participants.  Much of my own participation occurred during the beginning of the summit (which I was unable to collect!), although I did jump back in later in the afternoon.
Thoughts and ideas are welcome!

With Kahn on board, many of the most celebrated new artists of the new millennium – Feist, Chairlift, the Ting Tings, CSS, & Yael Naim, for example – started popping up in Apple ads just before hitting the mainstream.  Hailed as the “music psychic,” Kahn decided to start his own company, Good Ear Music Supervision (GEMS), which he founded in 2011.  He now uses his uncanny abilities to discover musical gems to pair brands and bands from coast to coast, effectively fostering connections between music and audiences across the country.

Selections from Death and Taxes Magazine interview (w/ some of my favorite quotes and insights):

The new Apple iPhone 5 is scheduled to be released on Friday, Sept 21, promising an improved audio experience for Apple consumers.  Apple’s new EarPods have been specially engineered to focus sound from three mic locations for clearer audio and to reduce background noise with its noise-cancelling technology.

Get ready to listen to your favorite gems with a new and improved sound!

Earlier in July, ArtsJournal blogger Diane Ragsdale challenged elements of Michael Maso’s acceptance speech given at the Theatre Communications Group conference in Boston.  He replied to Ms. Ragsdale’s retorts with a blog post of his own, wanting to address the important issues she had raised and to clarify any previous misconception.  Here is a rough video of his speech if you wish to view it:

The heated discussion that ensued as a result of his speech caused our arts management internship class to contemplate the role of the arts organizations we are currently interning with and defend whether or not we felt they are truly helping or hindering the quality of life and work of performing artists.  Here is my reaction based on my experience with the Baltimore Symphony Orchestra at Strathmore:

There are several indications that members of the Baltimore Symphony Orchestra, both musicians and staff, have established a long-lasting, healthy relationship with one another and consider the organization home.  Working as the BSO at Strathmore development intern and interacting with BSO musicians has allowed me to experience the BSO’s passionate and dedicated leadership and organizational teamwork firsthand.

“It Takes a Village,” a Symphony article released in 2009, describes the Baltimore Symphony Orchestra’s collaborative turnaround efforts in the aftermath of the 9/11 attacks and national recession.  “In a remarkable collective effort, the entire Baltimore team – administration, music director, musicians, board, and members of the extended ‘family’ – worked together to turn the orchestra’s situation around.”  The strength of their working relationship and sense of community remains apparent today.

Perhaps the strongest advocate for the musicians and their work is the BSO’s illustrious conductor and music director, Marin Alsop.  Since her appointment in 2007, Maestra Alsop has led the BSO into a more forward-thinking and modern position within the field and society.   In 2008, she partnered with the Naxos record label and brought the BSO online through iTunes.  Maestra Alsop has also played a major role in the formation and success of:

The passionate teamwork and dedication displayed by the musicians, conductor, board, and staff, have ultimately made these endeavors a great success.

When the orchestra experienced a growing deficit due the most recent national recession, BSO musicians initiated a fundraising campaign and agreed to a reduced salary and benefits for several years in a row.  Paul Meecham, the CEO/President of the BSO, has been supportive, yet firm in terms of financial management, which he has referred to as, “tough love.”

Founded in 1916, the organization has navigated almost a century of change and growth, including the emergence of the field of orchestra management as a formal discipline.  Although the Baltimore Symphony Orchestra may be unique in the sense that they are one in a small group of professional, full-time (year-round) orchestras in the United States, it is clear that the success of the organization rides on the musicians’ and staff members’ love of their work and the organization as a whole.

Everyone has had to work hard and make personal and financial sacrifices to live and work in nonprofit arts, but at the end of the day, the emotional reward, feeling of accomplishment, and relationship with the music, artists, and community, make everything worthwhile.  Everyone at the BSO wants the orchestra continue to evolve and succeed.

The Future of Classical Music?: Greg Sandow performs a book-in-progress….

I am so excited to know that influential teachers, thinkers, speakers, and musicians, such as Greg Sandow, are addressing change within the world symphony orchestras and classical music.  Change that has occurred over time, change that is currently happening, and change that needs to happen in order for a future to even exist.  What seems to be stagnant, however, is the presentation and programming of classical orchestra performances.  Or at least, this is the commonly held perception and expectation of many would-be concert goers.

I look forward to meeting with Mr. Sandow and discussing his thoughts, views, and experiences on this subject.  His new book, which will be known as Rebirth: The Future of Classical Music, will certainly be interesting to read! (Did anyone just get the urge to grab their phone and Tweet about this?)

Looking for something specific?

ART CART Crowdfunding Project http://rkthb.co/22568May 9th, 2013
ART CART's crowdfunding campaign for our second documentary. Capturing ART CART 2013 on film will help spread the word about our project that helps aging artists secure a lifetime of creative work and an important part of our nation's legacy.

Millennial Donors: Impact on Charitable Giving in the ArtsOctober 24th, 2012
Join @CStarek and @EALSAU in a live Twitter chat on Millennial donors and their impact on nonprofit fundraising.

Slideshare: Millennials in the Arts

Understanding Millennial audiences and donors, as well as marketing and fundraising strategies for engaging them in the performing arts. http://www.slideshare.net/MezzaphonicallySpeaking